Today was the last day of the eye drops. As with the right eye, I have been gradually reducing the frequency of the drops and I have just administered the last dose. Very pleased with that!

I found the first few days at home to be fairly unpleasant. In addition to all the eye drops, I’d been prescribed acetazolamide tablets to reduce the pressure. Fortunately I only had to take these for one more day after I got home but they made me feel quite lousy. Then I read up on the side effects of this drug. Blimey.

Once a couple more days had passed and the drug was out of my system I felt almost back to normal. My eye still looked “spectacular”. That’s my Halloween makeup sorted: 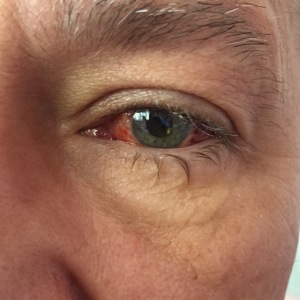 So all I had to contend with was the upright posturing. At least I’d had experience of this before so it was manageable although I was not used to sitting still for hour after hour.

Oh, and I was to all intents and purposes pretty much blind to start with. The gas bubble completely obscured the vision in my left eye and I had the cataract in my right which made my vision blurry. There was a bit of a silver lining though: the consultant had said that, based on my last vision tests, the vision in my right eye wasn’t as bad as I thought it was. His explanation was that my brain had made use of my good eye and deliberately under-used my right because of the cataract. Now that my left eye was useless, my brain would “swap” eyes and make more use of the right one. Which turned out to be the case. So I was able to navigate around, although I couldn’t read comfortably and watching TV was a bit pointless. Published wisdom advised against using a computer screen as it would put strain on the eyes (not that I could see much anyway). I did occasionally get Siri to read web pages to me with varying levels of success. It was at this point that I discovered audio books!

I had to keep up the posturing for 10 days and, by this stage, the gas bubble had partly dispersed. By now I was just able to see “over the top” of the bubble to the extent that I could see out of the top third of my eye. Sort of.

The next day I was back at Addenbrooke’s for my 2-week post-op checkup. Everything seemed to be progressing nicely. The next time they want to see me would be in about 6 weeks by which time all the redness and swelling will have gone. They also promised to discuss setting a date to remove the cataract. Good news!

Well that’s it. I have finally stopped the eye drops. Off to see the Doc next week.

Plus ça change, plus c’est la même chose, as the saying goes.

So, since stopping the Atropine it’s taken a week for my pupil size to return to normal. I had hoped that once the effect of the Atropine wore off, i.e. stopped the paralysing effect on the iris and lens muscles, that focussing might improve. I can’t see any sign of that yet although the sensitivity to very bright light – and yes I do include bright sunlight in that category – has reduced.

Meanwhile the reduced dosage of Dexamethasone has resulted in the eye becoming more sore and scratchy (partly due to the stitches I think) so I’ve increased my use of the soothing eye gel.

A bit about the medication. Adhering to the prescribed medication was emphasised to me at the hospital. Everything we’ve read online has reinforced this message; that the key to a good outcome, i.e. maximising the quality of sight that I will get back at the end of this process, is to be diligent with the eye drops. It seems that those who don’t get a good result are those who are lazy or casual in their interpretation of the dosage. So, if you’re reading this because you are in a similar situation to me, the one thing I will say is adhere to the eye drop regime that your surgeon has set for you. In my case, this started out as follows for the first two weeks:

Oh, and I also have some Carbomer liquid gel which I can use “as and when” as a sort of lubricant to ease the discomfort caused by the stitches. Did I mention the stitches? Well there are very small sutures in my eye where the surgeon made his incisions, these will apparently dissolve. Eventually. At the moment they aren’t a problem as the whole eye area is sore and watery so I can’t tell whether any of it is caused by the sutures.

After two weeks I get to reduce the frequency of the Dexamethasone and after 28 days I stop the Atropine. Mostly the eye drops continue until the end of February. Plus, you may need pain relief. While I was in hospital they were giving me Paracetamol and Codeine. Back home I stuck to Paracetamol but only for a couple of days.

Interesting fact: Atropine is a chemical which can be obtained from the poisonous plant “Deadly Nightshade”, or “Atropa Belladonna”. In its natural state the plant is very toxic if ingested, especially the berries. In olden days it was used as a cosmetic to dilate the pupils of women as it was considered to be attractive and seductive; “Bella Donna” is Italian for “Beautiful Lady”. Well, I’ve been using it for several days now and I’m still the same ugly bloke I was before all this started.

In fact the nurses said the exact opposite.

After a very strange night’s sleep (sitting up) it’s time to adjust to this “what I call” convalescent period. According to the medics, I will have swelling, watering and redness in the affected eye. Check, check and check. Apparently these will disappear gradually in that order over the next few months, helped by the eye drops.

A brief description of my surgery might be useful at this point.

My retina detached itself at the top of my eye. To repair this the surgeon made two small incisions at the bottom of my eye, inserting a light source in one and the keyhole surgery tools in the other. He then removed the vitreous humour (the gel inside my eye) and used a laser to “spot weld” (my terminology, not his) to refix the retina to the eye. He then used an “internal splint” to keep the repair in place, this (in my case) is a bubble of gas inside the eye, this is designed to obey the laws of physics so, being a gas, it floats to the top of my eye, pushing against the retina and keeping it in place while the repair heals. Over time the gas will dissipate until it has gone completely. The void will gradually be filled with saline naturally produced by my tears. While the gas bubble is there it stops light getting through to the retina so I won’t be able to see anything, apparently my sight will gradually return as the gas dissipates. If the damage had been at the bottom or back of my eye they would probably have used oil instead of gas. The advantage of this would be that I could have seen through it, however after a couple of weeks I would have had to undergo another procedure to remove the oil and replace it with saline.

So, in my case, I have to keep the gas bubble up against the top of my eye. This means keeping my head upright at all times, not to bend down or forward, or make any sudden or jerking movements. This is called “Post Operative Posturing”. The hard part about keeping my head upright is the fact that pretty much any household activity involves bending the head, this is something which I’m having to adjust to, although my wife and daughters are pretty good at nagging me, shouting “head up!” at every opportunity! On the plus side: at the moment I am pretty well confined to the sofa, I’m getting out of all the nasty domestic chores like washing up, cleaning, shopping, etc. I dare say I’ll be bored stiff in a couple of days. The other problem is sleeping upright which isn’t as easy as it sounds. It needs lots of pillows.